Was a Partner at Y Combinator. Co-founded Tutorspree. @harris.

Party (round) all the time?

There are a lot of party rounds happening right now in early stage investing. Definitions vary, but calling a round with greater than 10 investors a party seems about right. My thought is that party rounds tend to leave companies without an investor who cares enough or has pockets deep enough to bridge the company when necessary. Some rounds do actually have a strong lead, along with a syndicate of smaller, useful investors. Those generally have different dynamics.

What I've been trying to figure out is whether or not party rounds are increasing in frequency or not. Anecdotally, it feels like they are. Has something changed in the valley that party rounds should become preferred? The JOBS Act made it easier for large numbers of small investors to back companies in a way that was not previously legal. Platforms like Angel List reduce the friction required to find investors by creating a central, easily accessibly clearing house for companies looking for money and investors looking to give it to them. Or maybe the growing size and frequency of Demo Day type events (YC's included) have created an environment where party rounds are the new normal.

I took a look at Crunchbase, expecting to see that the overall number of party rounds has been rising uncontrollably. Interestingly, that's not what I found. 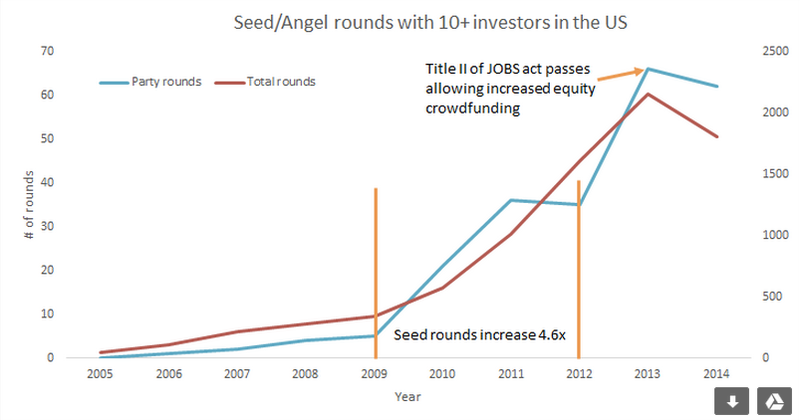 What's actually happening is that there are more startups getting funded, and the number of party rounds going to those companies is rising roughly in tandem. What's really surprising is that party rounds as a % of overall rounds actually fell from a peak of 3.7% in 2010 to 2.2% in 2012, though it's now back up to 3.42%. 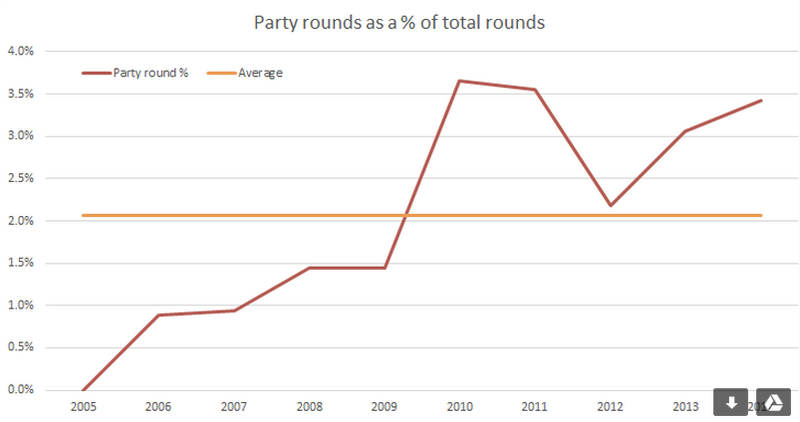 So it seems that we're not seeing a new normal when it comes to early stage investing. We're actually seeing an overall stable pattern ticking up in the last year after a drop. The real story here is the one about the overall number of startups getting funded as the economy has come out of the Financial Crisis. That number is clearly rising, though 2014 tailed off a bit[1]. More startups mean more innovation, and that's great.

The structure and composition of a single round of funding isn't the most important factor in a startup's success or failure. It's just another piece of the story, and one that doesn't seem to be changing much.[2]

[1] Not sure why the number would have dropped in 2014. Might be a function of the data available to Crunchbase when this run of the db was pulled on April 3, 2015.

[2] I am still curious about whether or not party rounds are a positive or negative influence, but don't yet have an answer.